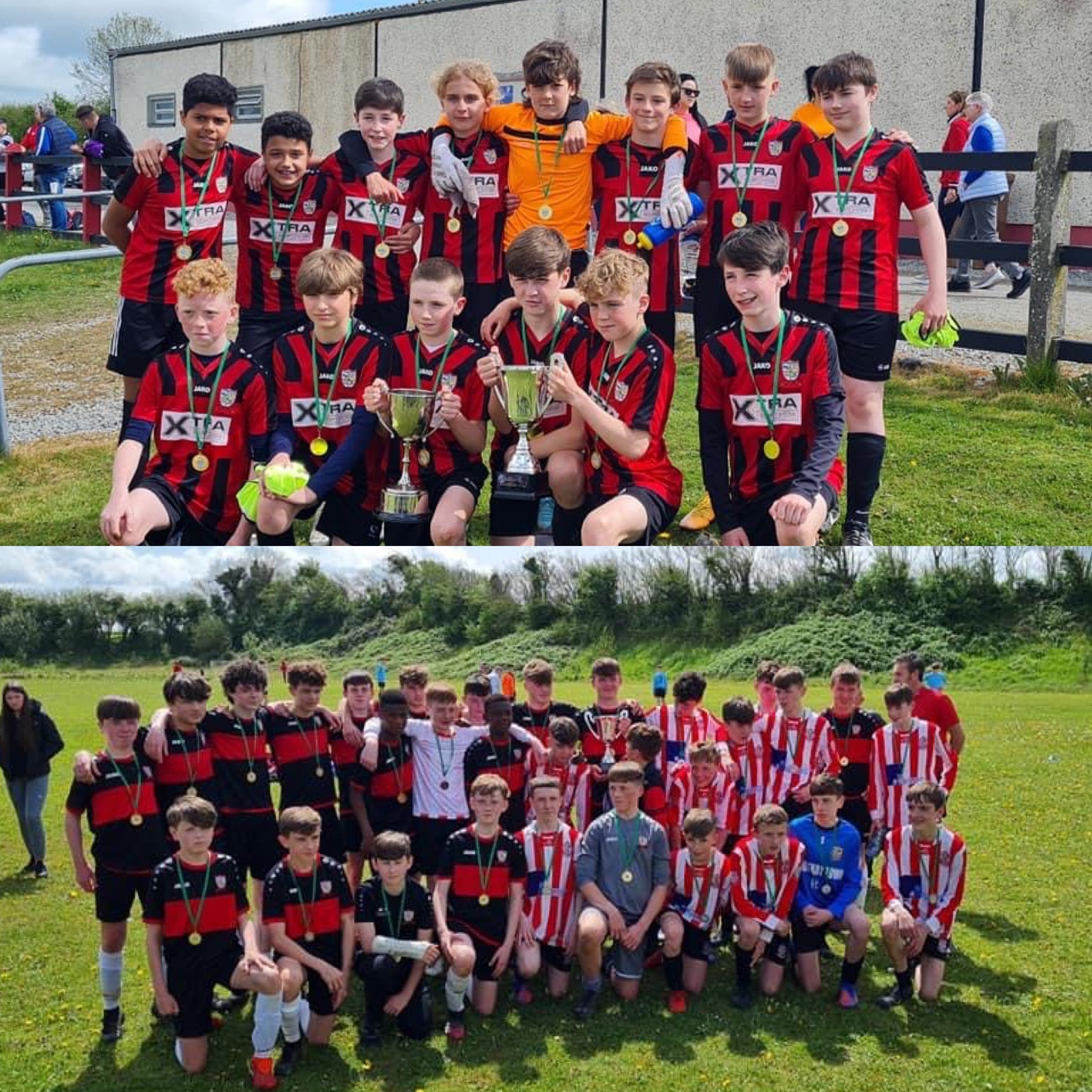 Huge congrats to our Under 13's and Under 14's who both added the SFAI Regional titles to their league titles at the weekend. Hopefully the success doesn't end there for both teams as they are both in cup competition this week and are hoping to end the season treble winners. The very best of luck to all players and managers and well done on a fantastic season so far.

We started the game really well and had Portlaoise on the back foot early and got our rewards early when Rhuon finished really well with his left foot after being released by James. We kept pushing for a 2nd but it wasn’t coming, Portlaoise were growing into the game and were very dangerous when they got on the ball but we battled hard and kept them at bay for a long time only for mistake at the back let in their No. 9 who finished really well from the edge of the box past Zac. We went in at half time 1-1.

Again we started the 2nd half really well and were unlucky not to score on a couple of occasions when the goal was at our mercy. The second half continued in the same vein with both teams looking very dangerous in the opposition half but neither could break the deadlock. The game finished 1-1 at full time and into extra time.

The game really sparked into life in extra time. In the 1st period of extra time Portlaoise pounced on a loose pass further up the field and hit us on the counter to take the lead to make it 2-1. Into the 2nd period of extra time and we got a lucky break when a loose ball from a corner fell to James who finished well. We then took the lead with an excellent finish by Jamie from a really tight angle after a super ball from Thomas. Cue wild celebrations from St Josephs but the drama didn’t end there and we conceded a couple of corners late on and just couldn’t deal with them and the Portlaoise midfielder rose highest in our box to score the equaliser. And so it finished 3-3 after extra time and on to penalties.

All our penalty takers(Jakob, Gary, Danny, Rhuon & Bobby) were successful and a brilliant save from the ever dependable Zac won the day for us. What an exciting game.

Best for us today were Jakob, Gary, Gavin, Bobby and Rhuon. Man of the Match goes to Thomas who had a brilliant game and led the line so well for us all morning, well done TJ.

The lads were presented with 2 cups today the regional cup and the U13 Major Division cup that they won a few weeks ago in Cushla. The lads are having a brilliant season and have worked so hard to get to where they are and they are a credit to their parents and the club.

What a final, what a squad of players winning 3-2 with backs to the wall against a very good and sporting Edenderry Town who despite going 3 0 down fought back and threw everything at our lads, but just missed out as our lads defended as if their lives depended on it.

We raced in to a 3-0 lead through Shay from a corner, Diarmuid from a great follow up on the keeper from a Ciano free kick and a cracker from Filipe, but a never say die attitude from Edenderry saw them claw 2 back and but for some defensive heroics from Jimmy, Barra, Eoin and JT they may have equalised but credit to our lads who stood tall and defended brilliantly.

MoM performance from Shay meant our lads held on for a fantastic win. Well done to all the lads who played their part in a historic win